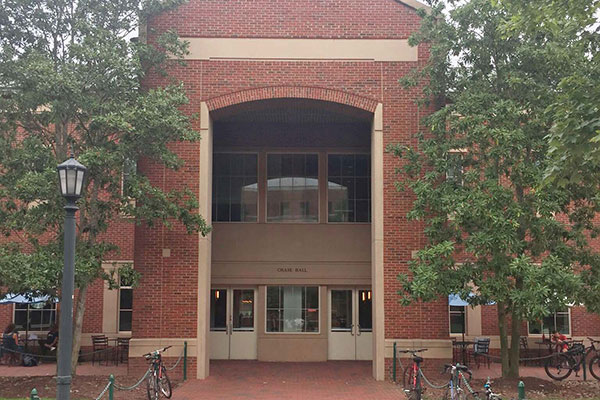 A South Campus dining hall built in 1965 was originally named Chase Hall in Chase’s honor, but that building was torn down in 2005 to make way for what are now the Student and Academic Services buildings. In March 2005, the Rams Head Center was opened, and the dining hall inside it was named Chase Dining Hall in October 2005. Despite this, the dining hall was nicknamed after the center where it was located, becoming known to students as Rams Head.

To eliminate any confusion, and to honor President Chase and his professional legacy at UNC, the name has been simplified to Chase Dining Hall. The name of Rams Head Plaza remains, but the dining hall will return to a name that best serves as a tribute to the University’s illustrious history and is a symbol of its continued growth.

In 1914 Henry Woodburn Chase was hired as a psychology professor at UNC-Chapel Hill. Four years later he was appointed acting dean of the College of Liberal Arts, then chairman of the faculty, and, in 1919, he became the 12th president of the University.

In the next eleven years Chase would establish the office of dean of students, reorganize the entire administrative structure of the University and increase the number of faculty from 78 to 115 and the annual support from $270,000 to more than $1,300,000. Chase also established many departments and studies including dramatic art, music, journalism, psychology, sociology, business administration, public welfare and library science. Additionally, Chase instituted the principle of staffing professional schools with faculty members who are not only professionally trained, but also experienced in teaching and administration.

Perhaps Chase’s greatest legacy, and one that still is relevant today, is his stand for academic freedom. During the 1920s, there was a nationwide crusade to outlaw the teaching of evolution. Chase rallied the support of students, faculty, alumni and leaders in the community who initially opposed the theory of evolution, to stand firm against legislative attempts to impinge on academic freedom. His efforts achieved academic freedom for the University from the national crusade against the scientific theory.

Chase left Chapel Hill in 1930 to become president of the University of Illinois and reorganized Illinois’s administrative structure in much the same way he organized Carolina’s. In 1933, he became chancellor of New York University and once again reorganized and expanded the University, making his life consequential and invaluable to three universities and to thousands of people.