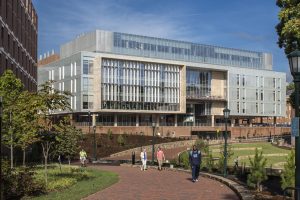 UNC-Chapel Hill is the highest ranked N.C. institution in the survey

The University of North Carolina at Chapel Hill ranks 28th among more than 200 participating colleges and universities nationwide, according to the Sierra Club “Cool Schools” annual sustainability report. The “Cool Schools” ranking serves as a guide for prospective students to compare schools’ commitment to sustainability. This year’s report reflects accomplishments through June 2016.

Carolina was recognized with high scores in the categories of innovation, co-curricular activities and planning. In the decade since the survey was launched Carolina has been consistently recognized as one of the leading institutions in sustainability in the United States.

The University’s ranking recognizes the long-term success of its many sustainability initiatives, such as reducing water use by 52 percent in the face of campus growth of more than seven million square feet since 2003, avoiding $40 million in water costs. Carolina’s Three Zeros Environmental Initiative — the new campus plan to move the campus toward water neutrality, zero waste, and greenhouse gas neutrality — drove a top score in the planning category.

The Sierra Club, which is the largest grassroots environmental organization in the United States, bases the school rankings on sustainability data collected in a range of areas. The raw data for scoring comes from the Association for the Advancement of Sustainability in Higher Education’s (AASHE) STARS self-reporting tool. The Club then takes the data and scores it across 64 questions. The scoring methodology was updated this year to reflect increased emphasis on climate-related issues.

“We are pleased that Carolina moved from 39th to 28th in the Cool Schools ranking and remains the top-ranked school in our state for sustainability,” said Brad Ives, the University’s chief sustainability officer and associate vice chancellor for campus enterprises. “We are energized by this benchmark of our progress to make our campus more sustainable, and we will continue to challenge ourselves and improve in this area as part of our Three Zeros Environmental Initiative.”