Home / Facilities Services News / For Delmazine McAdoo, Nothing Has Been Finer Than Working at Carolina 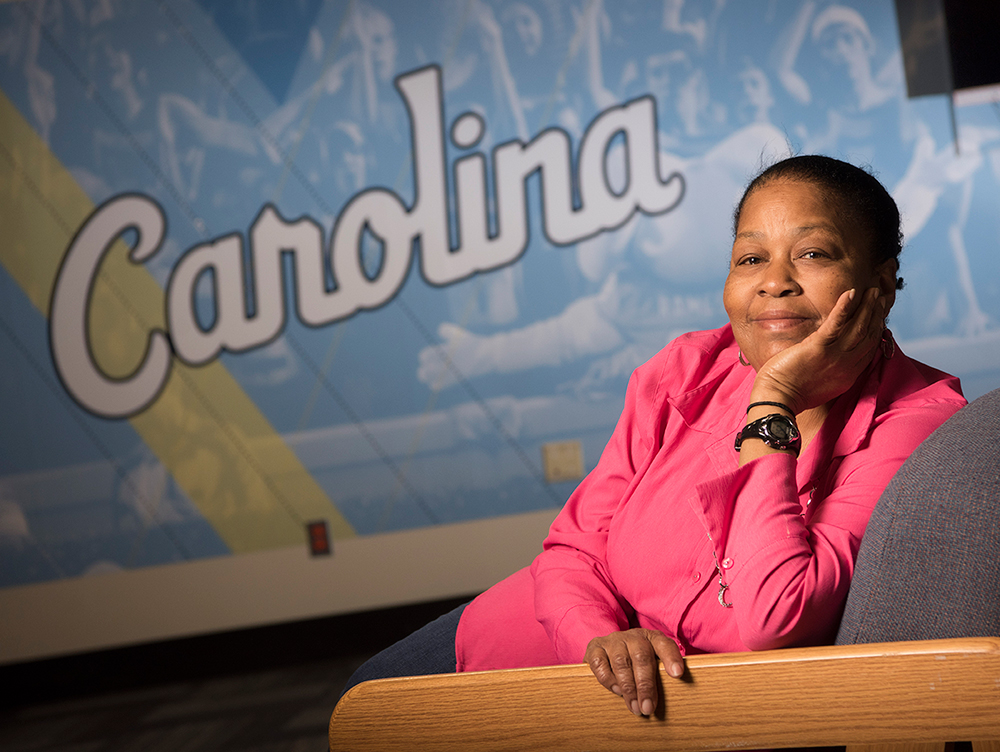 Delmazine McAdoo worked 33 years at a hosiery mill on a stretch of state highway between Mebane and Hillsborough, not far from the house where she grew up.

The mill, McAdoo said, was close enough to walk, and maybe that was the best reason she had to explain why she stayed there so long.

“Really the reason I stayed there so long is because I don’t drive,” McAdoo said. “It was right down the road from me, so I could walk if I had to, but my sister worked there, too, and she could drive me to work.”

When her mother died, she inherited the house where she has lived the past 55 years. She would probably still be at the mill, too, if not for the intervention of her daughter Angenette McAdoo.

McAdoo laughed at the memory of it, happy at how far she has come in the 16 years since she took her daughter’s advice and applied for a housekeeping job at Carolina.

Angenette had started working in Human Resources at Carolina the year before and knew that the housekeeping job would offer her mother not only more money, but another thing that McAdoo never got from the mill: real benefits.

“She told me, ‘You’ve worked there a long time and you are not getting anywhere except further behind.’ I have to give her credit,” McAdoo said. “She was really looking after me.”

This past year, other people were looking out for McAdoo, too, including the appreciative band of students and staff who nominated her for a 2017 C. Knox Massey Distinguished Service Award.

That turn of good fortune, McAdoo admitted, seemed almost too good to be true.

“I couldn’t believe it when my boss called to tell me I won a Massey. I said, ‘You’re telling a fib.’”

When she started working at Connor Residence Hall, she was afraid to speak to the students there, thinking they would either ignore her or be mean. What amazes McAdoo more than anything, she said, is the close bond that has developed between her and the students.

“When I first came here, these kids weren’t quite as friendly, and a lady told me, ‘Maybe you should try speaking to them sometime.’ And I said, ‘You know, I am scared.’ But I started talking, and these are nice kids. Three of them are just like my kids and I love them. But I love them all.”

And many have loved her back as their “Ms. D.”

In the nominating letter for McAdoo, student Savannah Barnwell wrote how McAdoo “always goes out of her way to be accommodating to us,” including the morning the housekeeper waited to start cleaning the bathroom so the student could rush in and brush her teeth.

Student Isabel Trumbull wrote about how McAdoo “works every day to make this my home.”

“As an out-of-state student who does not have the privilege to go home to do laundry, cook a meal or even just shower, it means the world to me to have people like Ms. D making Connor a space where I can do all of those things,” Trumbull said. “She is always a delight to talk to and has an uplifting spirit.”

Office assistant Mia Smith said McAdoo helped to foster the kind of community at Connor Residence Hall that lifted her spirits when she was down.

“A smile in the morning. A conversation in the afternoon. It was helpful. … She is a figure in my life that helped Carolina become home.”

The truth is, McAdoo said, coming to work every day lifts her spirits as well and helps to keep her going. But at 69, she has begun to wonder how much longer she can.

“That’s my problem right there,” McAdoo said. “I don’t want to retire, but my body does.”

What worries her most is that her knees will give out, McAdoo said, especially the one her doctor insists needs to be replaced.

She is so grateful to the people who nominated her that she doesn’t know what to say to thank them all.

As for Angenette, she is still dispensing advice to her mother — about using the money to pay off bills and to take a long, well-deserved vacation.

“I will,” McAdoo joked with her daughter, “but I probably won’t go no farther than Mebane or Durham.”

But for the time being, she added, she will be happy staying put in Chapel Hill.